Not fully appreciated by those who worry loudly about U.S. inflation is the impact of a near flatlined Chinese economy on world inflation.  China is the world’s second biggest economy and for the past couple of decades, the center and greatest contributor to international economic growth.  Chinese gross domestic product (GDP) growth has routinely been in high single digit territory for years.  In 2022, China’s GDP was to expand by around 5.5% – a real come down vs. previous years.  That goal has gone out the door.  The central government is no longer standing by its previous target.  No growth of GDP seems to be where the Chinese will land this year. Why?  Primarily the slowdown is due to their severe Covid lockdown rules, which have been imposed, relaxed, imposed and relaxed.  Factories around the country have not been able to operate with such haphazard rules. Due to periodic company shutdowns, demand for various input materials has dropped rather sharply, putting downward pressure on many commodities’ prices and thus heavily influencing commodity inflation around the world.  Further, Chinese real estate is in something of a meltdown, due to new regulatory oversight of the industry.  Financing has dried up for new projects.  With real estate demand down, building material demand is down and again prices for commodities like copper and lumber are down.  These commodities are traded around the world and with China in an economic slumber, prices have fallen sharply (as can be seen in Chart 1 below at the far right of the chart) which influence U.S. inflation. 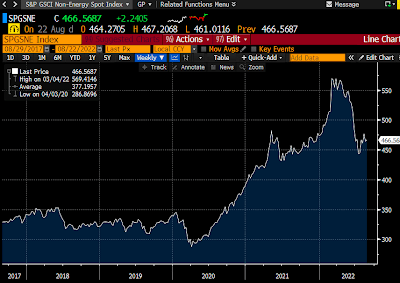 Counterbalancing the above to some extent is the slowdown in money supply growth as depicted by M2. It was Nobel Laureate Milton Friedman who taught the world that when too much money chases too few goods or services, then there is inflation.  When the world was faced with the Covid pandemic, all people wanted was cash.  They were not interested in things – they wanted cash in order to survive.  The U.S. government supplied the cash through various programs like rental help and PPP loan programs and people took all they could.  The money supply (M2) exploded as can be seen in Chart 2. 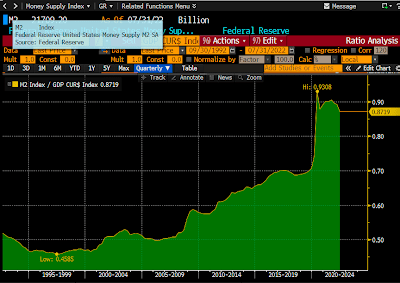 Now that we have learned how to reasonably live with Covid, people are out and about.  They are no longer as interested in holding cash for an emergency.  They are more interested in spending their reserves on new things, or a dinner or a trip.  This is also demonstrated in Chart 2 with the rollover of M2 on the far right of the chart.  So now the money is being spent and when too many people want the same thing (like a new car) all at the same time, then prices go up and we all experience inflation – as we are right now.

Combating inflation is one of the primary jobs for the U.S. Federal Reserve Bank (the Fed) – the other being assuring full employment.  The Fed is on the job.  Interest rates have been hiked, making money more expensive to use and more attractive to hold.  Savings deposits actually now earn a saver some return which they had not for years.  The Fed’s rhetoric has become harsh to enforce the idea with investors that it is serious about its inflation task at hand and will not falter until inflation is back to where the Fed deems it non- threatening to the American economy.  Already there are results.  As measured by the Fed’s favorite inflation gauge, inflation is down a couple of tenths of a percent year over year to +4.6% in July vs. +4.8% in June.  It is way too early to declare the job is done and the Chairman of the Fed has said as much.  But at least inflation is still not ramping up as it was earlier this year and according to the latest University of Michigan consumer sentiment poll, consumers see inflation going down (not up) in the years ahead.  In other words, inflation has not become embedded in the consumer’s psyche.  This is very important because if it were, it would create a feedback loop of rising prices and wages.  With no loop, prices can settle down.  As inflation cools, the Fed can begin to lower interest rates. Lowering interest rates will lower discount rates, raise P/E (price/earnings) ratios and raise equity prices.

Inflation is the worry of markets right now.  There are forces (the slowdown in the Chinese economy and the Fed) which are pushing against inflation.  It is early days, but the freshest economic information available would suggest that there is some success in fighting inflation.  So much so that consumer sentiment, as evidenced by the latest University of Michigan consumer survey, rose to a depressed 58.2 in August from a very depressed 51.5 in July due to the fall in inflation and consumers’ outlook for lower inflation in the future.  This should be supportive for stock and bond prices going forward.