No one seems to know what the plan is – that is the Biden tax plan to pay for the “Build Back America Better” infrastructure plan, a plan which has changed dramatically over the last few months and is still not settled as this is being written. The Biden tax plan was announced months ago with great fanfare. The objective was simple – get more money from those individuals and corporations who have been successful. Income taxes, capital gains taxes, foreign taxes were all going up and deductions (which the government has put in place over the years to foster certain investment behaviors) were going down or eliminated. But “pushback” within President Biden’s own Democratic Party has scuttled the original Biden tax plan and several iterations of it since. Right now, no one knows what will be in the plan. We mention these tax machinations because taxes affect corporate earnings performance, cash flow performance and thus ultimately stock price performance. So investors are rightly concerned about what will be in the final edition of the tax plan and whose “ox will be gored”. Right now, confusion reigns in the halls of Congress and amidst pundits. The ”tea leaves” which can be read would suggest that the sweeping tax plans first read out to the public are “off the table”. It seems that much more narrowly focused tax hikes and deduction reductions are likely to survive. We shall stay abreast of this important matter and report back at a later date. (We hasten to mention that Baldwin’s Family Office will be having a Zoom call on Wednesday, November 3 at 4 PM to discuss this very topic. Please contact us if you would like to attend.)

We found the following chart very interesting. Examined is the history over the last twenty years of operating profit margins for the S&P 500. 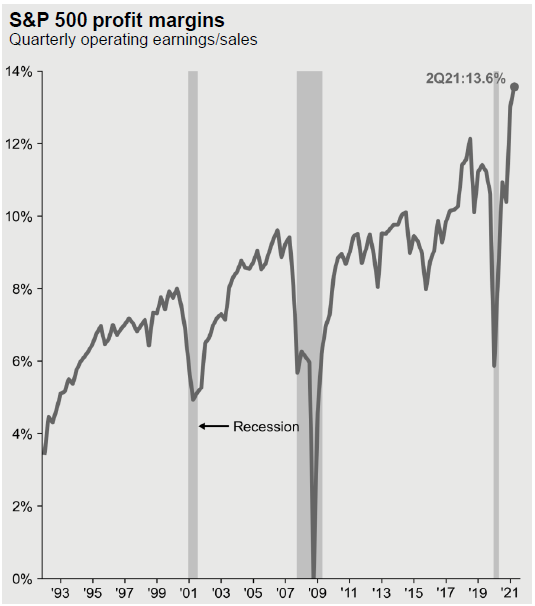 Noticeable is the rise of margins, interrupted only by recessions. This is reflective of the world’s turn to globalization and digitalization. In other words, as company managements replaced expensive labor (think the U.S. and western Europe) with cheap labor (think Mexico and Asia) and labor with capital (think computer hardware and software), corporate margins increased – i.e. companies became more profitable. Numerous analysts have been calling for years for a return to “the historical mean” or lower margins, saying that the current levels of corporate profitability are unsustainable. Nevertheless, company management teams have continued to surprise Wall Street analysts to the upside with consistently better than expected profitability. We believe that this corporate profitability phenomenon “still has legs”. There may be “bumps in the road” as managers shift supply lines to add resiliency to the logistics network. But business is being done all around the world today and technology will continue to enable its expansion to corners of the world not yet fully exploited.

Little needs to be said about the following chart. It is included because it paints a hopeful picture after a horrendous period in which the globe has had to deal with the COVID-19 pandemic. 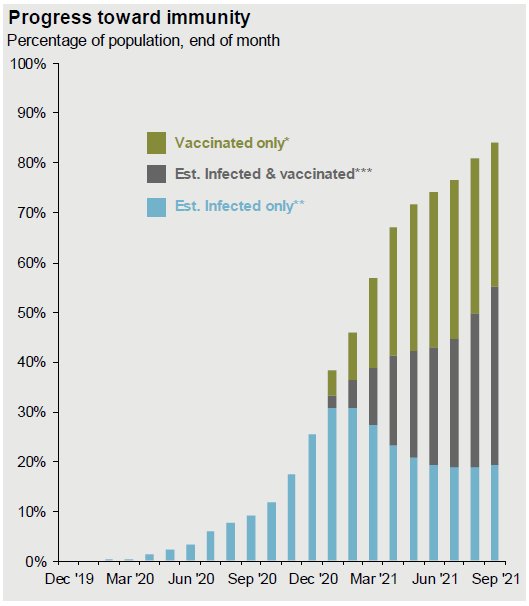 We are getting closer and closer to what experts describe as “herd immunity” which should make COVID manageable if not curable. Reflecting this progress are various indices of high frequency economic activity as depicted in the following chart. 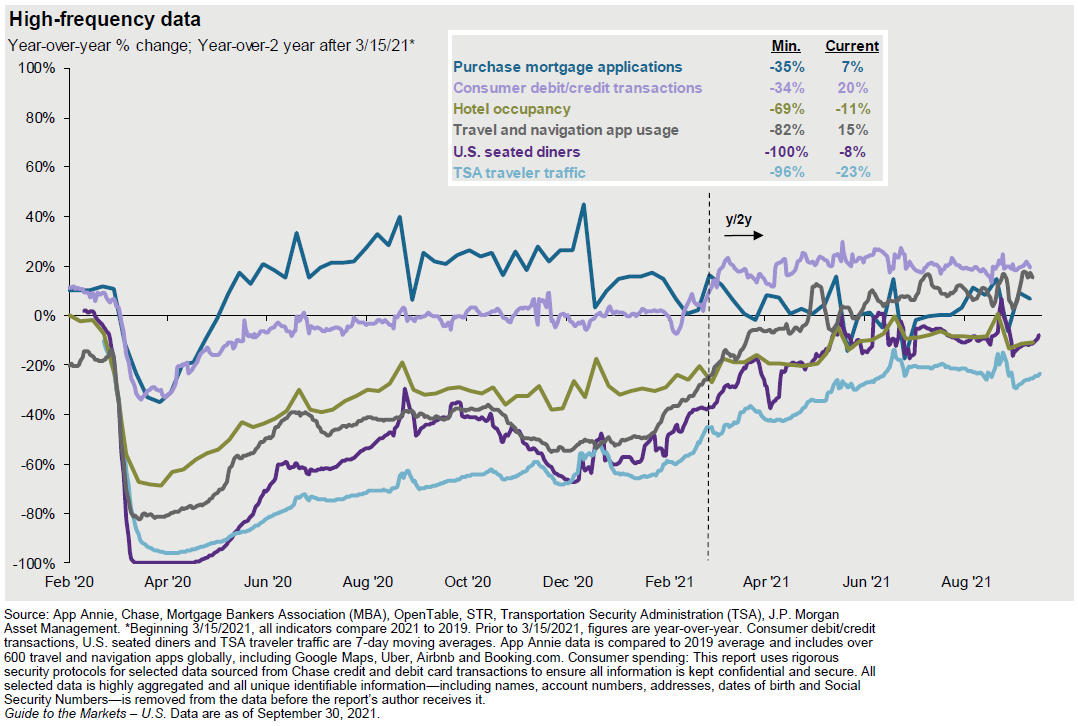 As the reader will note, things are getting better and this is and will be reflected in company sales, earnings and cash flows.