What parent has not heard that oft repeated question from the back seat of a car: “are we there yet”?  Usually, the repetition of the question picks up nearer the end of the trip and the response from the front seat usually is “we’re just about there”.  In much the same way, we believe that the Fed is just about done its job of raising interest rates to quell inflation fears. 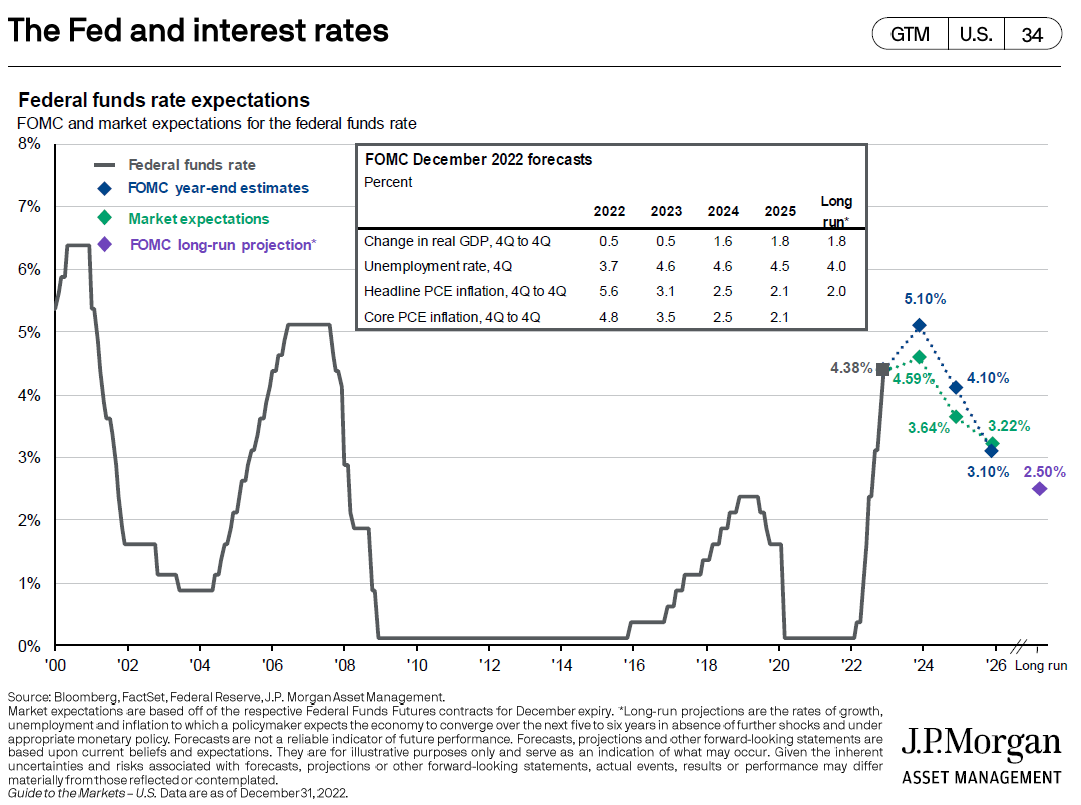 As can be seen in Chart 1, the Fed has already accomplished most of its work, having raised rates sharply in 2022 from essentially 0% to 4.38%. Consensus expectations by Fed Governors for future rate hikes top out at 5.10% in 2023 while the market thinks that the Fed will only go up to 4.59% in the coming months.  Thereafter, both the markets and the Fed believe that interest rates will decline in late 2023 or early 2024.  Why?  Because there are too many forward-looking data points which are consistently showing that inflation has rolled over and more importantly, that consumer expectations for inflation have remained well anchored. 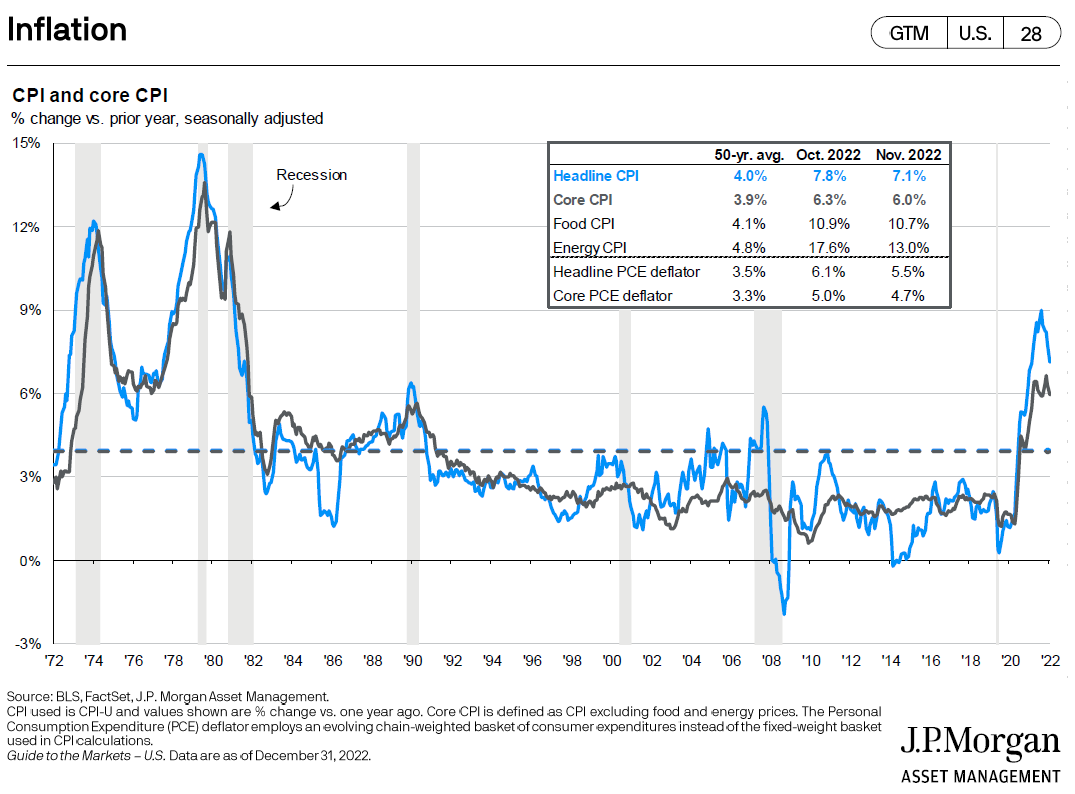 Chart 2 and the top portion of Chart 4 suggest that “peak inflation” may be in the rear-view mirror.  In Chart 3, please look at the far-right hand column of the inflation heatmap.  This is the most recent data from November 2022 and the reader will note the prevalence of the color green which means that month over month inflation is cooling. 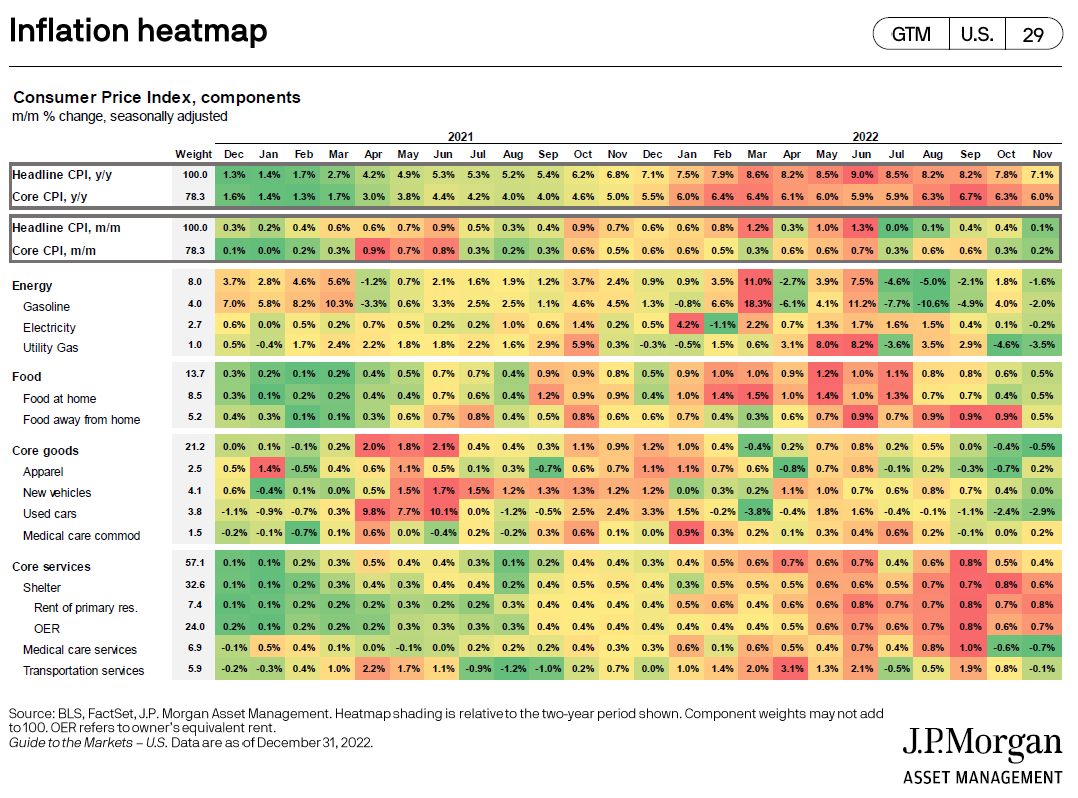 In the lower portion of Chart 4 below, please note the expectation for inflation three years in the future is about 3% vs. earlier expectations exceeding 4%. 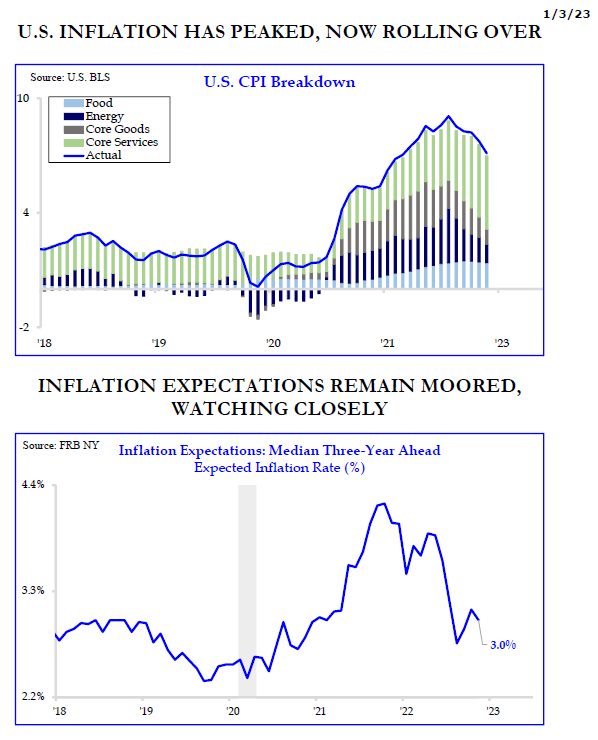 Evidence supports our thesis that the Fed is nearing the end of its interest rate hiking journey, which will take some pressure off both the economy and the markets.  So yes, we’re just about there!

Shifting now to examining the repercussions of recent Fed activity, the consensus thinking today is that the Fed will kill the U.S. economy, plunging America into recession by raising interest rates in order to defeat inflation.  Evidence of the Fed’s intent and forecasting the anticipated result of recession is an inverted yield curve (i.e., a bond maturity curve that has higher short-term rates than long term rates) which has a sterling predictive record. Interestingly, the economist (Campbell Harvey, Professor at Duke University’s Fuqua School of Business) who developed this inverted yield curve predictor in his dissertation at the University of Chicago believes that his forecasting tool used by so many is flashing a false signal.

“Despite the curve being inverted for the ninth time since 1968, it’s probably not a harbinger for a recession.  One of the reasons is the fact the yield curve-growth relation has become so well-known and widely covered in the popular media that now it impacts behavior.  The awareness induces companies and consumers to take risk-mitigating actions, such as increasing savings and avoiding major investment projects – which bode well for the economy.  Another boost to the economy is coming from the jobs markets, where the current excess demand for labor means that laid off workers will likely find new positions more quickly than usual.  In addition, given the large job cuts so far have been in the tech sector, those highly skilled recently fired workers are also not apt to be unemployed for very long.  When you put all this together it suggests we could dodge the bullet.  Avoiding the hard landing – recession- and realizing slow growth or minor negative growth.  If a recession arrives, it will be mild.” [i]

So, let’s take a look at an updated chart that we have used in the past which outlines consumer finances, remembering that the U.S. consumer represents about 70% of the American economy. 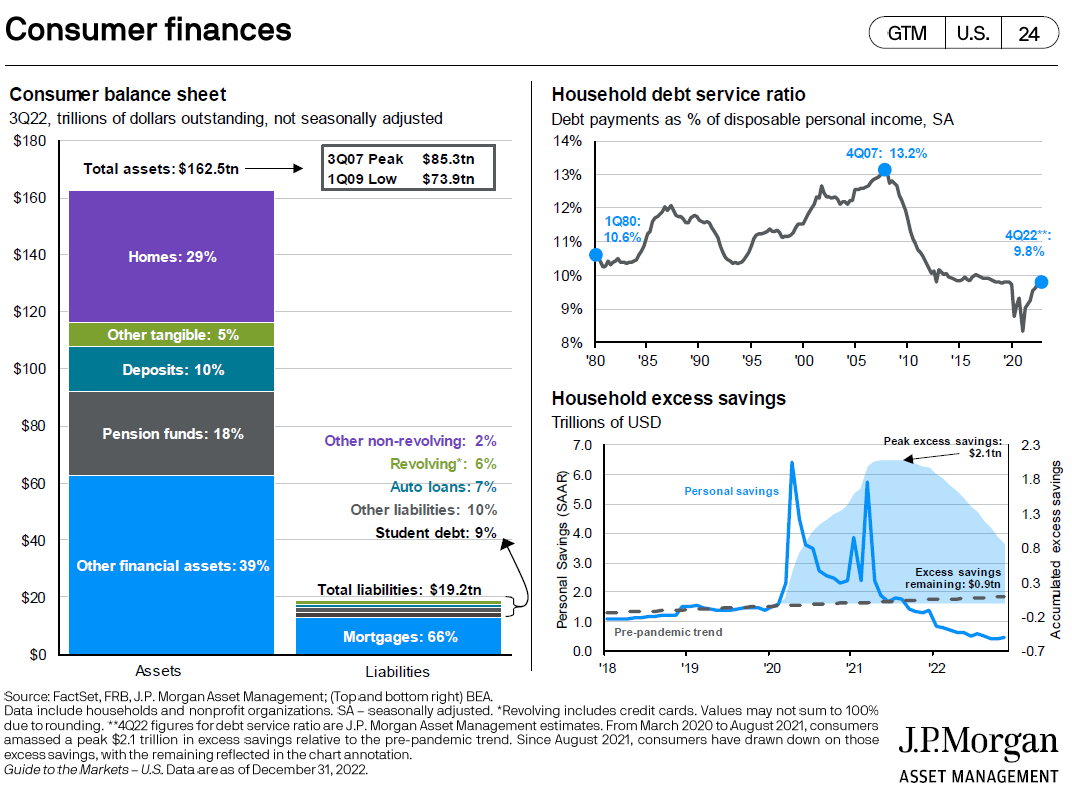 On the left side the reader will note the American consumer’s balance sheet as of the end of Q3 2022.  Total assets equaled $ 162.5tn.  Total liabilities were $19.2tn – net worth equaling $143.3tn.  Cash equaled $16.25tn or 85% of Total Liabilities.  On to the right side of the page, the household debt service ratio (debt payments as % of disposable personal income) was 9.8% and there were $0.9tn of excess savings.  Most importantly, if people have jobs, they will spend money.  Both jobs and job openings remain plentiful: considering an historically low 3.7% unemployment rate and a very high Job Openings to Unemployed Ratio as shown on the top portion of Chart 6. 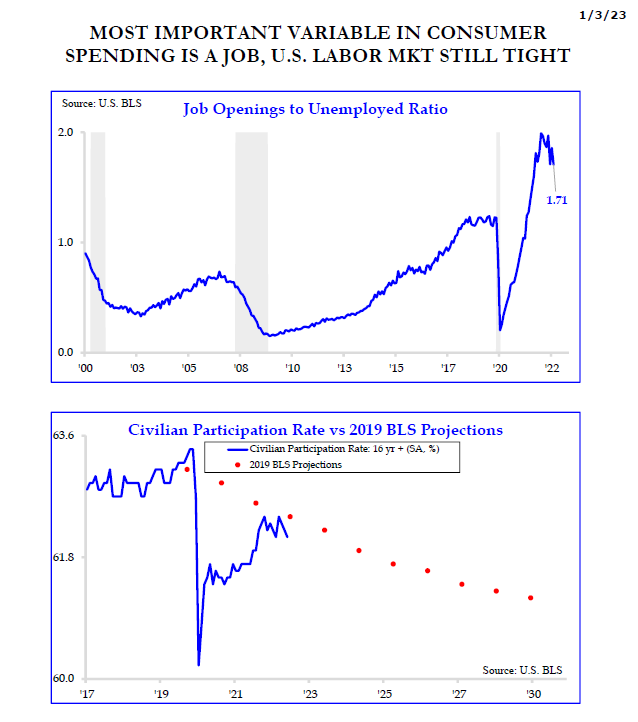 In short, the American consumer is liquid and in very good financial shape – though more pressed than before due to increased debt incurred to support a desired lifestyle made more expensive because of inflation.  While still a little early to finally know figures, we think it safe to say that corporate America had a fine year in 2022 with record earnings – although you wouldn’t have known it from stock market performance for most equities.  We have noted in the past that state and local governments are also in good financial condition and this point is made on the right side of Chart 7. 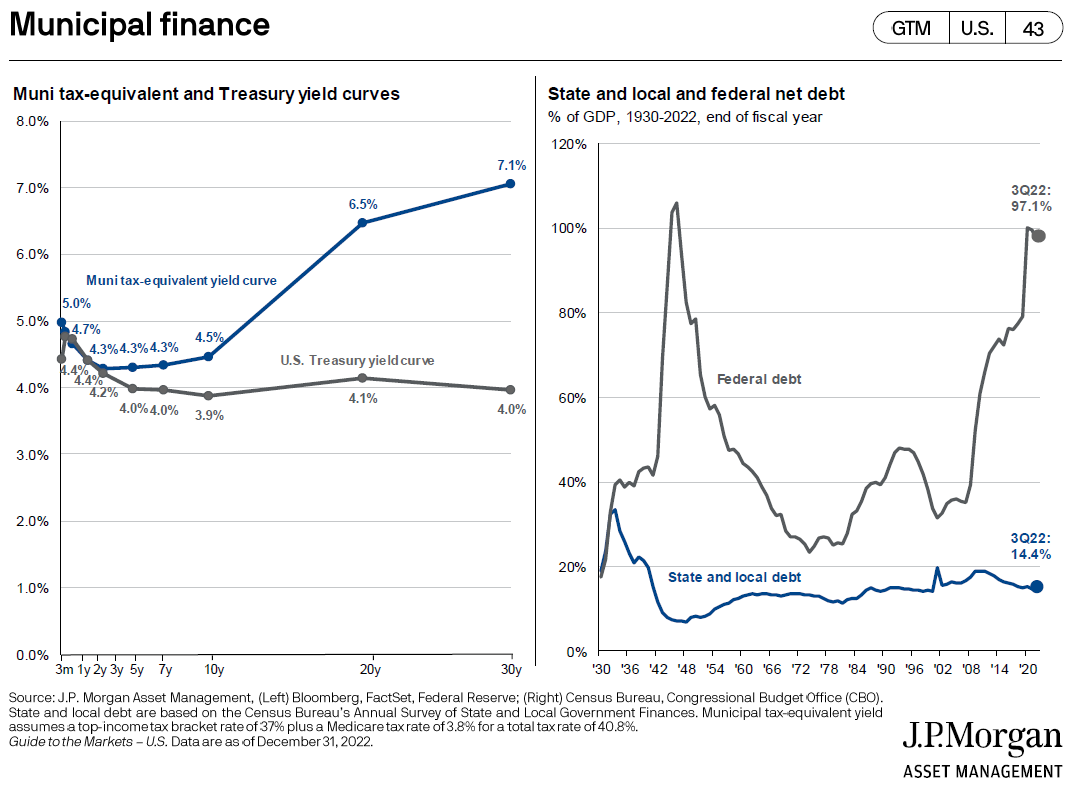 As we have also suggested in the past, the only entity which has a bit of a sketchy balance sheet is the federal government – which is also depicted in Chart 7.  So with the U.S. consumer in good shape, along with corporate America and state and local governments, it is still hard for us to forecast a hard recession with such apparent economic resilience in so many quarters of our economy.  We believe that the U.S. economy is/will decelerate because the Fed wants it to slow to tame inflation.  But we do not subscribe to the “hard landing” thesis about which many worry.  Further, there are appropriations from the federal government which have yet to be spent.  Defense spending is on the rise for obvious reasons.  And to satisfy some constituents as a tradeoff for the higher defense spending, more money is going to the National Institutes of Health for medical research (Chart 8). 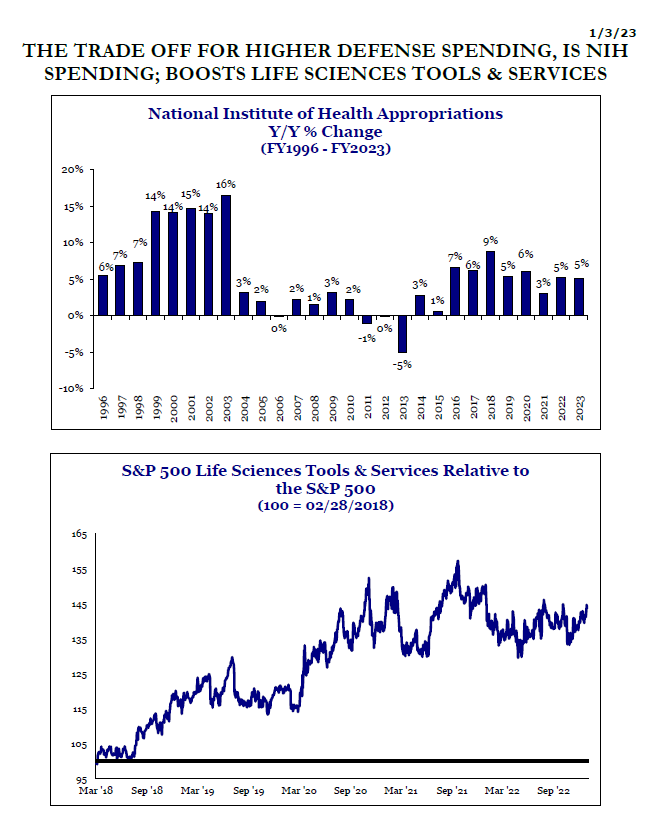 In addition, more money is going to infrastructure and clean energy initiatives (Chart 9). 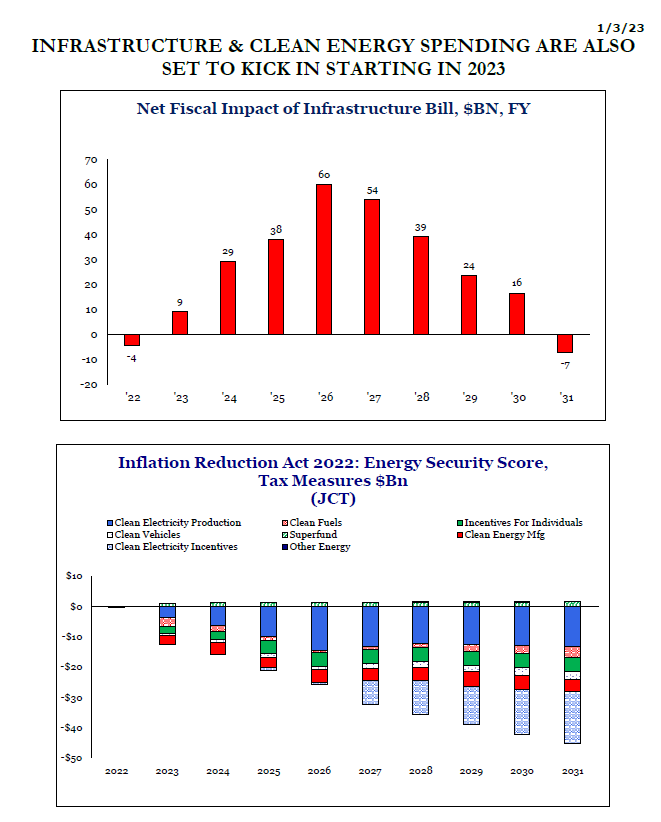 Lots of money which has not yet been distributed will be spent in 2023, 2024 and onwards.  This spending will help cushion economic softness being engineered by the Fed.

With the prospect of interest rates rolling over in the relatively near term and both the economy and corporate earnings slowing but not imploding, the much cheaper than a year ago stock markets should have support.  Having two consecutive years of severely weak equity market results has historically been highly anomalous. We do not think the present environment would support such a scenario.

We had been saying for quite some time that the bond markets were overpriced.  So it was not surprising to us that bond prices sold off/yields rose when the Federal Reserve changed its strategy.  For some perspective, we found Chart 10 to be interesting. 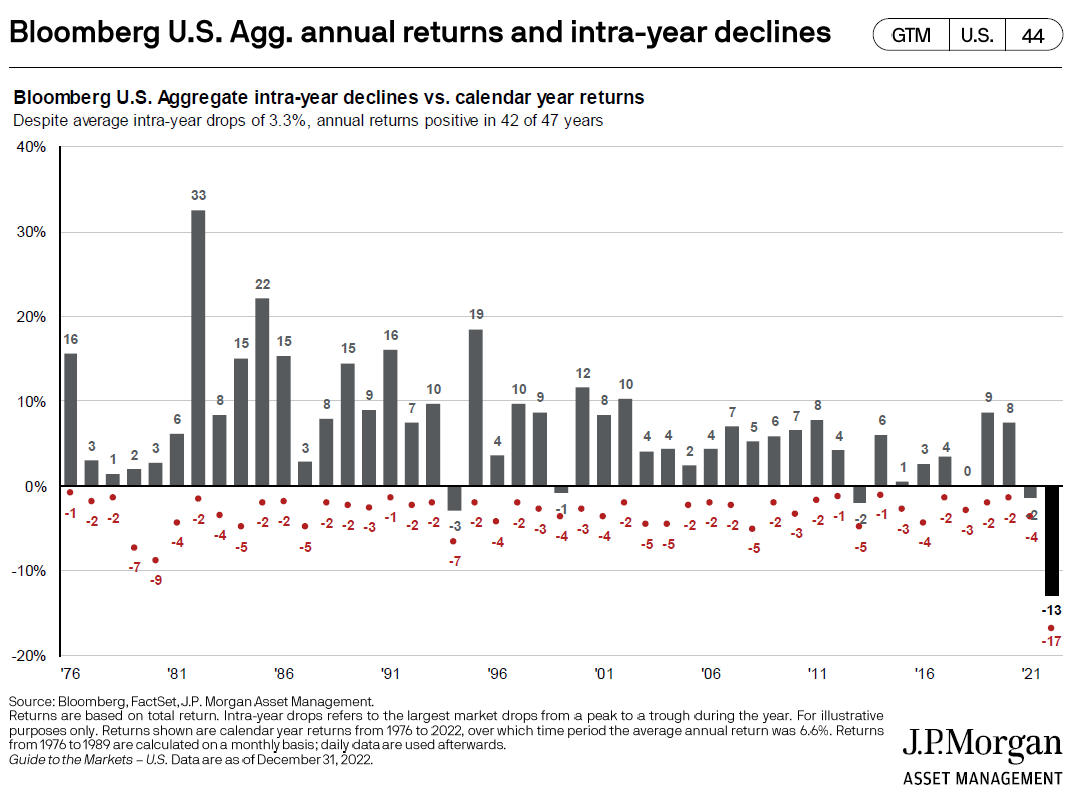 Rare has it been since 1976 that fixed income investors lost money. In 2022, not only did bond investors lose money – but they lost substantial money, setting a record negative year. Such a bad result does have a silver lining however – bonds are cheap and yields are high as shown in Chart 11. 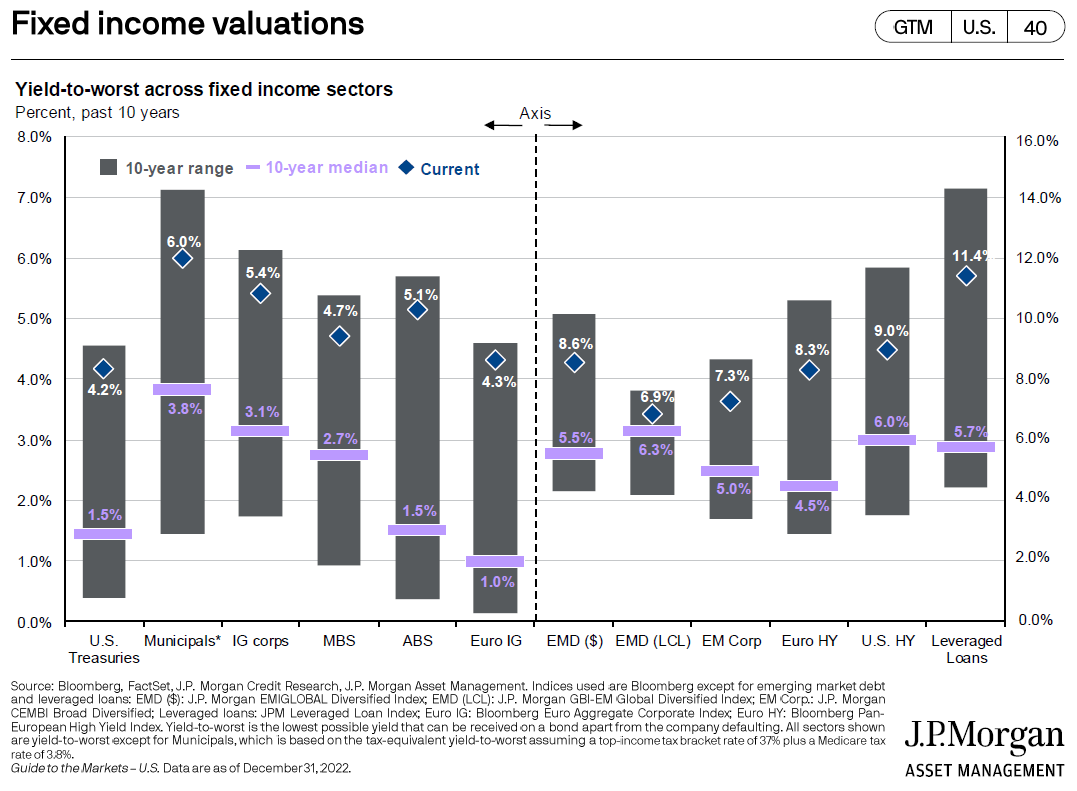 If you agree that the Fed is nearly done its interest hiking work, then bonds would be a place to invest some money.

For the first time in a long while, foreign stocks as measured by the MSCI All Country World ex-US Index outperformed the S&P 500 in 2022 (-15.6% vs. -19%) including currency effects. Even though the U.S. dollar was strong against most any currency in 2022 because of international political worries and interest rate differentials, foreign stocks had a banner year relative U.S. securities.  Nevertheless, international equity valuations remain 2 standard deviations cheaper to U.S. values and foreign dividend yields are about 2 standard deviations higher than U.S. dividend yields. 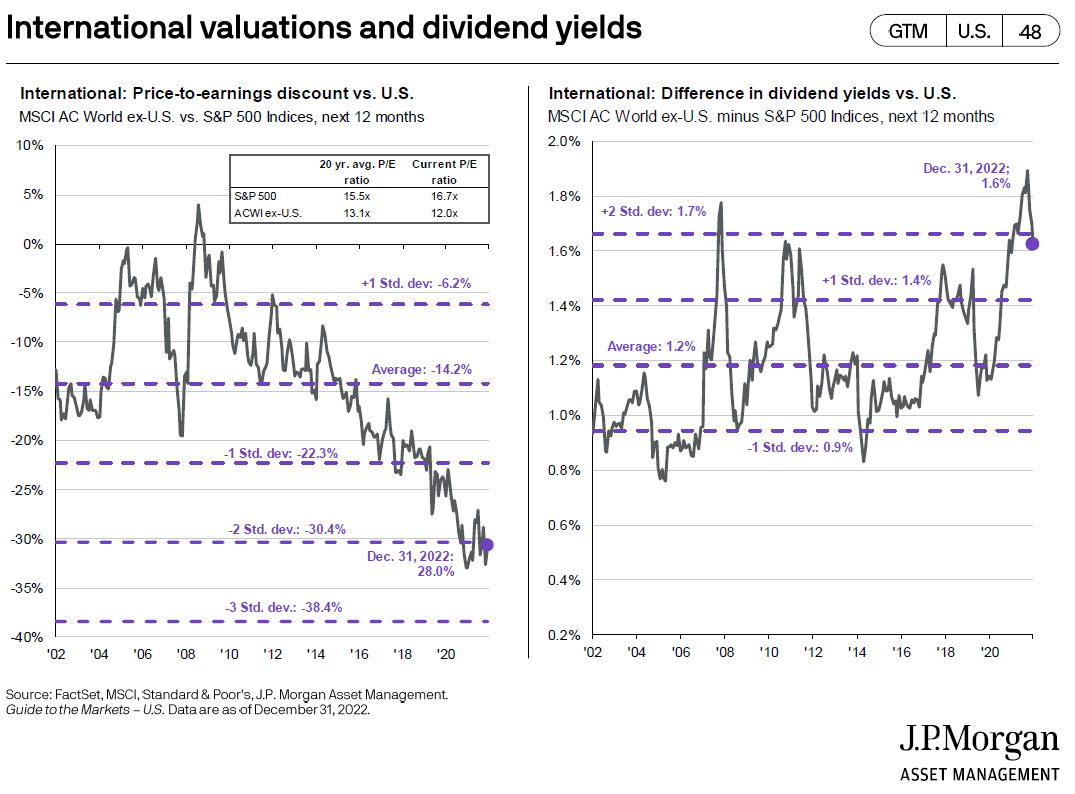 As to the future, the emergence of a vibrant middle class drove American economic growth for decades and we believe that same story will play out in other countries around the world. 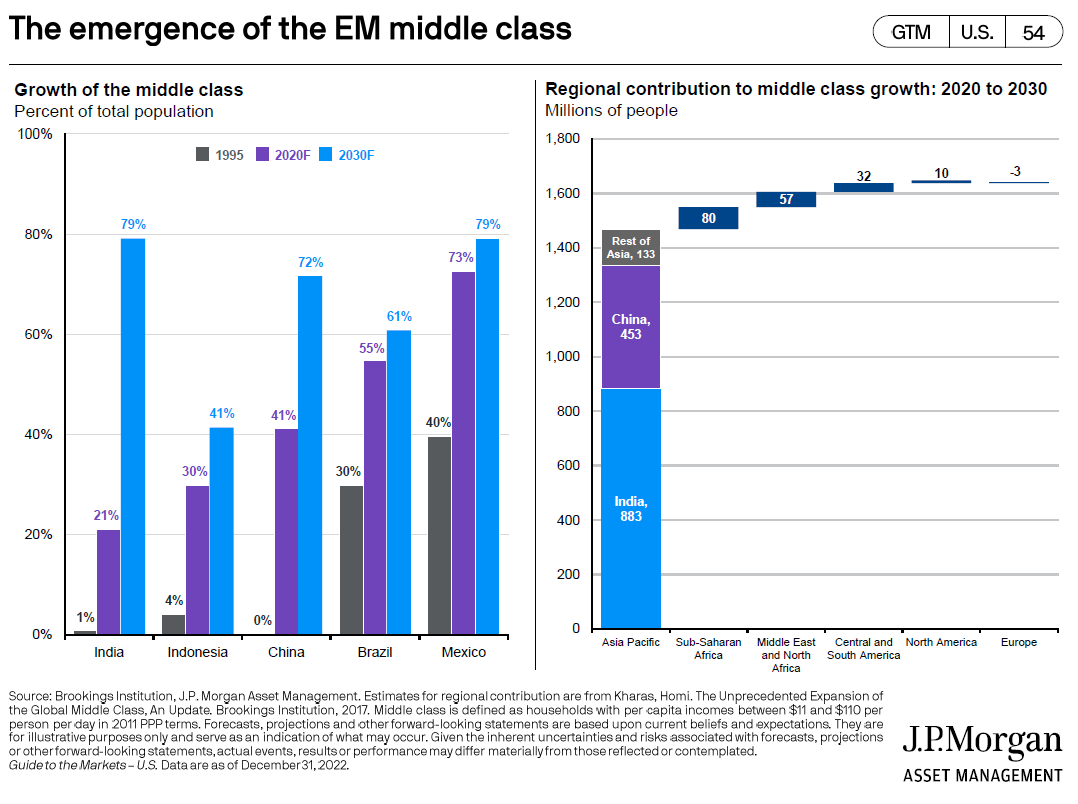 With international stocks still inexpensive vs. the U.S., diversification into foreign names would seem to make sense on a going forward basis.

Source: “Can The US Dodge A Recession? The Economist Thinks So” – Bloomberg
[1] https://www.bloomberg.com/news/articles/2023-01-04/pioneering-yiled-curve-economist-sees-us-able-to-dodge-recession?sref=pNrpLU4z 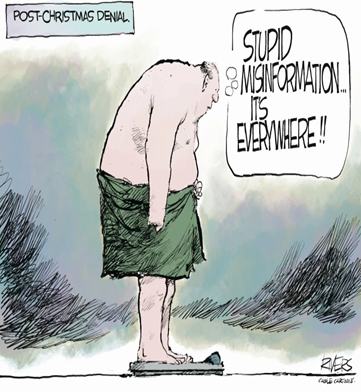 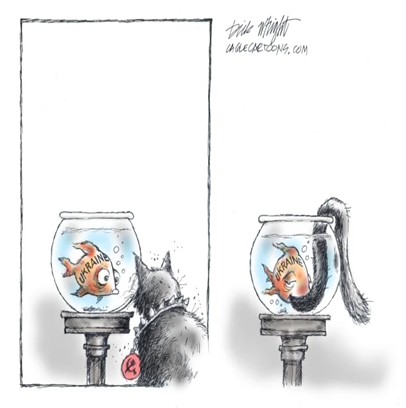 The opinions expressed in this Commentary are those of Baldwin Investment Management, LLC. These views are subject to change at any time based on market and other conditions, and no forecasts can be guaranteed.

The reported numbers enclosed are derived from sources believed to be reliable. However, we cannot guarantee their accuracy. Past performance does not guarantee future results.